After nearly 15 inspiring years at the Guardian, I will be leaving at the end of May to join the Twitter media team in San Francisco as its first Data Editor.

A lot has changed since 1998 when I joined as editor of NewsUnlimited, the then-titled GuardianUnlimited’s news section.The front page of the site looked like this: 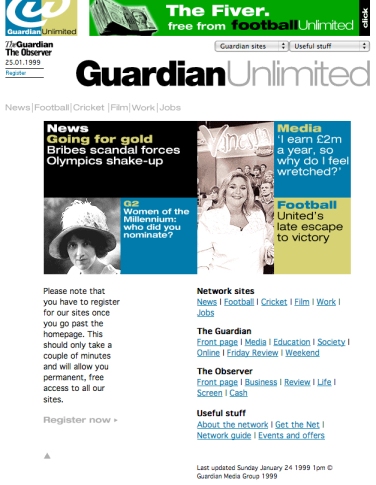 Since then, there has been a revolution in the way news is presented and absorbed. I moved to the newspaper newsdesk on September 10, 2001. The events of the next day and the months after created an unprecedented demand for instant news and analysis. On a personal level, it changed my career path: before then I saw stories in terms of words; working with the Guardian’s graphics team in the aftermath taught me that there were new ways to tell those stories and that data journalism was one of the most effective.

All news organisations are struggling with challenges to what they thought they were. The newspaper’s traditional one-way relationship with readers has been replaced by a new equality where stories are broken by anyone with a mobile device. It’s a process that we’ve seen in Boston this week. Just listen to this excellent Steve Richards documentary to see how news gathering has been transformed.

The Guardian has embraced this new open journalism with enthusiasm. Editor Alan Rusbridger encouraged my setting up the Datablog in 2009 and has championed our work in data journalism. It must have seemed a little odd to want to create a site which would allow users to download and analyse datasets such as public spending figures for themselves. Traditionally that was the reporter’s job – why would we share it? The point was to democratise that data; it belongs to everyone, after all.

During my time at the Guardian, I have been fortunate to work with some of the greatest journalists you could ever meet – from the reporters and columnists to the desk editors and designers who lead the world in what they do. It’s a wrench to leave the Datablog – and a talented team in Ami Sedghi, John Burn-Murdoch and James Ball (who will take on editing the site, and be brilliant).

Twitter has become such an important element in the way we work as journalists. It’s impossible to ignore, and increasingly at the heart of every major event, from politics to sport and entertainment. As data editor, I’ll be helping to explain how this phenomenon works.

And I can’t imagine a better job than getting to tell stories based on some of the most amazing data around.

Data journalist, writer, speaker. Author of 'Facts are Sacred', from Faber & Faber and a range of infographics for children books from Candlewick. Edited and launched the Guardian Datablog. Now works for Google in California as Data Editor and is Director of the Sigma awards for data journalism.
View all posts by Simon Rogers »
« Data journalism: a video guide to its practice and history
Gallery: images from a newspaper »