The new White House open data executive order: how does it compare to the British version? 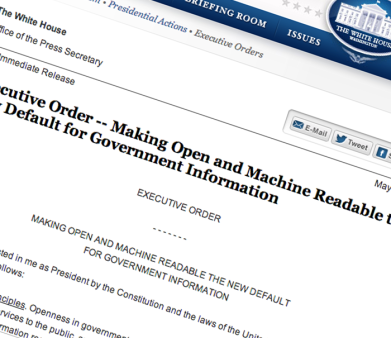 The White House has released an executive order today committing all federal government data to be open and machine-readable. Signed by President Barack Obama – who was also one of the people behind the Federal Funding Accountability and Transparency Bill of 2006, back in the day when he was a Senator. That Bill became an act – and led directly to the creation of data.gov.

Just for reference, an executive order is a decree of the President which has the full force of law. They don’t exist in the UK in the same way, but back in 2010, then-new Prime Minister David Cameron wrote a public letter to senior civil servants, the cabinet and members of the government setting out what the government planned to do with open data.

So – ignoring the constitutional differences and focussing on the substance – how do the two approaches compare?

“Greater transparency across Government is at the heart of our shared commitment to enable the public to hold politicians and public bodies to account; to reduce the deficit and deliver better value for money in public spending; and to realise significant economic benefits by enabling businesses and non-profit organisations to build innovative applications and websites using public data” Cameron letter, May 2010

The first and most obvious difference is that the UK government has approached open data without major legislative change. In an interview with I wrote with Rohan Silva, the Downing Street policy advisor behind much of what the government has done in the UK, he said this was because of the importance of just releasing data and making it happen:

However, as the Sunlight Foundation put it today, previous attempts to create an open data structure in the US have floundered on the rocks of enforcement:

“The default state of new and modernized Government information resources shall be open and machine readable” White House executive order, May 2013

“Ensure that any data published is made available in an open format so that it can be re-used by third parties. From July 2010, government departments and agencies should ensure that any information published includes the underlying data in an open standardised format … a presumption in favour of transparency, with all published data licensed for free reuse” Cameron letter, May 2010

Formats are boring but they matter; the more time spent cleaning up messy data or extracting it from PDFs, the less time to make useful things with it. However, just saying that hasn’t been enough in the UK. The data from UK government annual reports is often published just as PDFs, despite this breaching the Ministerial code, as Francis Maude said last year. Without the legislative power of the US executive order, it’s hard to see how this could change.

“Shall issue an Open Data Policy to advance the management of Government information as an asset” White House executive order, May 2013

This is the key thing about open data – how do you encourage organisations to actually make money from it?

Open data strategies are now in place across Whitehall government departments – with each ministry required to produce one.

But the big step towards the UK government treating data as an asset was to be the Public Data Corporation, announced in 2011 to huge fanfare and open data campaigner disquiet. In fact, it didn’t produce much at all – and was quietly dissolved only a year later in February 2012.

“Agencies shall implement the requirements of the Open Data Policy and shall adhere to the deadlines” White House executive order, May 2013

“I would be grateful if departments would take immediate action to meet this timetable for data transparency” Cameron letter, May 2010

Deadlines are all-important: in Silva’s interview he points out that the UK government needed to give real deadlines

“The rules were that ‘if you release it, they will build it’ – just get the data out there and developers will do the work”

More on the executive order

Data journalist, writer, speaker. Author of 'Facts are Sacred', from Faber & Faber and a range of infographics for children books from Candlewick. Edited and launched the Guardian Datablog. Now works for Google in California as Data Editor and is Director of the Sigma awards for data journalism.
View all posts by Simon Rogers »
« My life as a data visualisation
Chart: A data journalism workflow – translated into different languages »